We may don’t know but healthy pair of foot is the key to keep over whole body fit as all the body parts are connected with foot. After all whether it’s walking, running, exercising, or just standing, having feet that are comfortable and well-cared will makes the experience much more pleasant. With each pace over foot take a force several time of over body weight. And if it’s still got ignore will it be fair enough.

Keep your feet healthy to go ahead miles and miles. As in over life hurdles are their same way there are hurdles in feet case too. To make over foot go smother below we are having common foot ailments. With how to judge, prevent and treat it as soon as possible to get back on your routine.

Ankle sprain is due to twisting or force on the ankle bone which in turn result in one or more ligaments on the outside of the ankle to be stretch or torn. Ankle sprain can turn into long-term problem if it’s not treated properly. 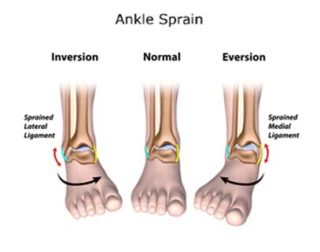 Ankle consist of two join one on the other. An ankle bone can consist of one or more bone and injuring the surrounding ligaments or connecting tissues. As a result of trauma any bone out of three bones which make ankle joint could break and in turn it can affect by damaging ligaments.

Foot is complex and strongest structure in over body which contain 26 bones, 33 joints (20 of which are actively articulated), and more than a hundred muscles, tendons, and ligaments. Foot is terminal portion of a limb which allows movement in over body and bears over body weight.

Often it happen injuries in foot parts get heal without operative treatment. Types of fractures include stress fractures and general bone fractures. Over forefoot, which is your toes to the middle of your foot gets affected by stress fractures. Stress fracture is nothing but tiny cracks in the bone surface.

There are other types of fracture as well. They may be stable or unstable. Stable in which there is no shift in bone alignment and unstable which is also called as displaced in which the bone ends no longer line up properly. Trauma is the real cause of such fracture, like heavy object fallen on your foot, twisted injury. Closed fracture is when bone does not break through the skin.

An ankle twisting may tear tendon which is attached to the bone, it pull a small piece of the bone away from its place. Jones fracture is another serious injury, it occurs in the base of the bone and in turns it dispute the blood supply to the bone. Such injury take long time to heal and may require surgery.

A tumor under the toenail is being names as Osteochondromas. It forms under the toenail. This type of tumors generally found in children’s and young adult. Such tumors will not turn into pain unless they cause irritation to the surrounding tissue.

In some cases it can cause to ingrown toenail. When it’s removed surgically, sometimes it happens that it recur even after processing. It affect male more than female. Such tumor can also be cause of hereditary.

Surgical removal (Recurrence of the tumor is possible).

Surgery (removing the loose fragment of cartilage and bone from the ankle joint and placing small drill holes in the defect).

Shin splints can also be called as medial tibial stress syndrome. It’s a pain along the inner edge of the shinbone. Shin splints are pain to either side of the leg bone.They are characterized by general pain in the lower region of the leg between the knee and the ankle. It is related to a collapsing arch.

Sports injury occurs in athletic activities or exercising. Will discuss one by one according to sports or exercise type.

Injury due to Martial arts and kick boxing are plantar fasciitis, Achilles tendonitis, sesamoiditis, and ankle sprains. For such case stretching is recommended for about 15 minutes before getting into pitch or performing any kick or punch.

To make injury-free aerobic proper shoes are recommended. Shoes should provide sufficient cushioning and shock absorption to compensate for pressure on the foot many times greater than found in walking. It should also have medial-lateral stability. Because impact of force of aerobic is up to six times as of gravity, which is then goes to 26 bones in over foot.

Team sports include football, basketball, soccer, field hockey and lacrosse which often lead to foot problem like ankle and big toe. The main cause of team sports injury is due to artificial surfaces used during play.

Turf toe is also called as Big toe. It’s the result of hyperextension of the big toe joint because heel is raised off the ground surface. Due to external force which is placed on big toe and soft tissue which support big toe on the top are torn or ruptured.

As pain is not much more which will keep athlete away from their game. This in turn cause further injury to big toe and then healing time will be increased.

We take pride in providing you with a comfortable office experience. Our Qualified staff is friendly and will ensure a pleasant visit.