It’s a disorder of foot that can be inborn or assimilated. You can see below deformities to know more about it.

It’s an uncommon, congenital fetal abnormality which can lead to disfigured feet. ABS occur randomly, it’s not genetic nor caused by anything a pregnant mom did during pregnancy. ABS can cause different anomalies depend on body part which is affected. Like limb can actually be completely amputated, cleft lip and palate, clubfeet.

Surgery (excision of the fibrous band and any necrotic tissue)

Bunions are malformation of the joint connecting to big toe of the foot which can lead to swollen and tender. It is characterized by deviation of the first joint of the big toe to slant outward and the second joint to angle toward the other toes. It can also be described as enlargement of bone or tissue around the joint at the bottom of the big toe. Its most common in the women.

Claw toe normally happen when muscles of foot got weaken, or we can say it’s caused by nerve damage from disease like alcoholism or diabetes. Claw toe means your toe claw digging down into shoes or bent upward from joint, both the situation turns into painful calluses. If it’s left untreated it will get worse and it can turn to permanent deformity.

Splint or tape (to hold your toes)

It’s non-life major threatening birth defects. In such case it affects foot and ankle, twisting the heel and toes inward. Club foot, calf and leg are smaller and shorter than normal. It’s not painful, it can be easily corrected and patient can come out of it normally. This defect of foot look like the top of the foot is on the bottom. 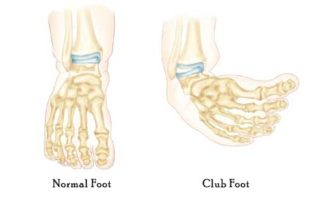 It’s generally found in new born baby, every 1,000 new born has clubfoot. One third of this will be having both feet clubbed. Caused of club foot is still under research.

Most over this problem is seen in boy baby, two of three club foot babies are boy. The probability of club foot is twice if you, your spouse or your other children will have it.

Club foot goal of treatment is to make baby foot function properly till the time baby is ready to stand on his own foot.

Dysplasia is also called as EpiphysealisHemimelica. It’s a disorder which will affect joints of bone. It can be developed on hand as well as foot. This disease is characterized as the overgrowth of cartilage on the end of one or more long bones.

Generally limb is involved which can be unequal in the length.

An enchondroma is a cartilage cyst found in the bone marrow. It’s originates from cartilage. Enchondroma is a type of benign bone tumor. It affects the cartilage which is inside of the bones. Small tumors called enchondromas can sometimes form in the bone beneath the toenail. It can affect both hand and feet. Such tumor can involve large portion of bones which cause thinning of the cortex, which in turn can weaken the bone and cause it to break.

Flat feet are a postural deformity. In this the arches of the foot collapse, with the entire sole of the foot coming into complete or near-complete contact with the ground. The appearance of flat feet is normal and cannot be judged due to baby fat which masks the developing arch and partly because the arch has not yet fully developed.

Longitudinal arch is not developed. Most people have developed normal arches. Feet should be flexible and an arch should appear when person stands on his/her toes. Stiff, inflexible or pain may be associated with other condition and needs medical care.

In the children foot pain, ankle pain or lower leg pain may be due to flat feet and should be evaluated.

Tibialis Posterior Tendinitis is caused by inflammation of the tendon of the tibialis posterior, which in turn is painful progressive flat foot. Tendon then becomes inflamed, stretched or suffers a partial or total tear. This condition may lead to severe disability and chronic pain if left untreated. If People have flat feet or an abnormal attachment of the tendon to the bones in the mid foot then they are predisposed to such condition of sever disability.

Gordon syndrome is a genetic disorder which is also known as Distal Arthrogryposes. It is extremely rare disorder. In such case stiffness and impaired mobility of certain joints of the lower arms and legs including the knees, elbows, wrists, and/or ankles.

In such disorder joints are permanently fixed in a bent or flexed position. It is characterized as permanent fixation of several fingers in a flexed position, abnormal bending inward of the foot, and, less often, and incomplete closure of the roof of the mouth.

In some cases additional abnormalities may be present. Severity of symptoms may vary from case to case. It is thought to be an inherited condition.

Haglund Deformity also known as “Mulholland deformity”, “posterior calcaneal tuberosity”, “pump bump” or “retrocalcaneal bursitis”. It can be classified as painful enlargement of the back of the heel bonethat most often leads to painful bursitis. The soft tissue near heel bone becomes irritated by shoes, rigid heel, counters of shoes rubbing up and down.

Haglund’s deformity is often called “pump bump” because the rigid backs of pump-style shoes can create pressure that aggravates the enlargement when walking.

Because of irritation women tend to develop the condition more than men.

Osteomyelitis is an infection and inflammation of bones. Osteomyelitis usually begins as an acute infection, but it may evolve into a chronic condition. Bacteria can spread through infected skin, muscle, tendons to the bones. It can spread from one part of body to other through blood.

In child long bone of arms or legs are involved. In adult feet, hip, spine bone is involved.

It is classified into below structure :

Hallux rigidis is also called as stiff big toe. If you are affected with stiff big toe walking can become painful and difficult.

It is form of arthritis in foot. Injuries can also wear down articular cartilage, causing raw bone to rub together. On the top of the bone, bone spur or overgrowth may be seen. This overgrowth prevent toe from bending as much as it need to move.

Hallux varus is a deformity of the great toe joint where the hallux is deviated medially. In this condition, big toe points away from the second toe. It is uncommon in west. But it is common in cultures where the population remains unshod.

It is also called as contracted toe. Is a deformity of the second, third or fourth toe causing it to permanently bent, resembling a hammer. In this case toe is bent in claw like position. Mallet and claw toe is similar condition. If left untreated it can become inflexible.

Jackson–Weiss syndrome (JWS) is a genetic disorder. It is characterized by foot abnormalities and the premature fusion of certain bones of the skull, which prevents further growth of the skull and affects the shape of the head and face.

Mallet toes happens due to muscle and bone imbalance. This becomes inflated in people with active lifestyle. Mallet toe can cause extreme discomfort and can intensify with restrictive or improper fitting footwear.

Treatment for such case is design to relieve pressure, reduce friction, and transfer forces from the sensitive areas.

In general we can say metetersalgis as a term used to refer to any painful foot condition affecting the metatarsal region of the foot. It’s a common problem affecting joint and bones.

Pain in Ball of your foot, which is described as the area between your arch and the toes is called metatarsalgia. The pain can be in any five bones in the mid position.

It is also termed as dropped metatarsal heads.

It cause one of metatarsal joints to become painful or inflamed due to abnormal distribution of weight. General people gets callus under the joint.

A special case of under lapping toes is called as congenital curly toes.

It is characterized by one toe lying on top of adjacent toe. Overlapping toes may develop in the unborn fetus. Under lapping toes generally involve the fourth and fifth toes. The fifth toe is the most affected.

In Peronel tendon dislocation extra muscles is originated. Muscle grows outside of the calves. This muscle plays a very important role in standing. It allows you to roll outside of the foot. Also termed as stirrup tendons because it holds up arch of foot during standing position, muscle is held in place through band of tissues.

Injury on such tendon can cause muscle to stretch or tear. And at worse it can get dislocated.

Calf stretches down behind the inside of the ankle and attaches to bones in the middle of the foot. This helps hold your arch up and provides support as you step off on your toes when walking.

If this calf gets over stretched or torn, inflamed you can get pain on inner ankle and slowly lose inner arch which is on the bottom part of your feet, which leads to flat foot.

If it is left untreated it can lead up to arthritis in hind foot. Pain could also get worse toward the outer side of ankle.

Sesamoiditis occur on the bottom of the foot, behind the big toe. Big toe causes inflammation or rupture of the two small bones (sesamoids) under the first metatarsal bones. Sesamoiditis in the forefoot also assist with weight-bearing and help elevate the bones of the great toe. Sesamoids can also fracture like other bones. On top of it tendons surrounding the sesamoids can become irritated or inflamed. It’s common among ballet dancers, runners and baseball catchers.

It is also termed as ” ball bearings of the foot “.

Excessive forces caused by sudden bending upwards of the big toe, high heels, or a stumble can contribute to sesamoiditis.

Spurs mostly occur in the heel and near toes. It’s among common foot problem. When the plantar tendon pulls its attachment to the heel bone, growth of bone underside, forepart of the heel bone, heel spurs occur.

To reduce strain to ligament proper warm-up and athletic shoes will work. Bone spurs can also develop on top of big toe joint.

It’s an abnormal connecting bridge of tissue between two normally-separate tarsal bones. I bring bone in such a condition which cause decrease or absence of motion in joints of foot. It can be in one joint or many. Lack of motion is due to abnormal bone, cartilage or fibrous tissue growth across a joint.

The bones found at the top of the arch, the heel, and the ankle are referred to as the tarsal bones. A tarsal coalition is an abnormal connection between two of the tarsal bones in the back of the foot or the arch.

We take pride in providing you with a comfortable office experience. Our Qualified staff is friendly and will ensure a pleasant visit.